“We must give young people a voice; I’ll make sure that their voice is heard. Their main concern is the lack of youth centres in the city. Equally, I’m committed to working with schools to ensure that they are preparing our children the world out there.”

Abdi Mohamed – For Mahadi Sharif, the upcoming local elections are not only about improving political participation. It is, and more importantly, about embarking on a political career. But for many Somalis in Manchester it is about electing the first Somali councillor, who would in turn enable them gain access to the local decision making platforms.

Mahadi Sharif, a councillor candidate for Moss Side ward, will be the first Somali ethnic heritage councillor in Manchester if elected in the 5th May local elections. Despite there is a Somali Tory candidate Aden Hassan who is running for the same seat, he is very confident that he will be elected; not because of Moss Side being a stronghold for Labour – and that all the councillors in Manchester are Labour (96 of them) – but because of his work in the community and the area, as well as his determination to realise his political ambition.

The councillor prospective, who came to the UK as a teenager and holds a political and international relations degree from Salford University, said that he has always interested in politics. “I’ve always followed politics; I’ve made sure to stay neutral about the Somali politics, because it is complicated and it isn’t applicable in the UK.”

“I joined the Labour party because of their political ideology,” he explained. “I aligned with Labour because I believe some of their values such as social justice, rights matched by responsibilities, equality, community values, the NHS, and reward for hard work.”

Sharif works at a special school and as a youth worker, which enabled him gain a “particular understanding of some of the issues facing young people”. He wants to be a champion for the youth in the area – and the city – regardless of their background.

“The cuts were political,” stresses Sharif. “The Tories penalised young people in relation to education, employment and housing. They stopped them to become independent.”

“We must give young people a voice; I will make sure that their voice is heard. Their main concern is the lack of youth centres in the city.”

This is consistent with available evidence. A 2014 research report by Manchester Metropolitan University found that young people strongly believe youth centres could improve their lives. The report notes that when asked young people for their ideas on how life could be improved, 17 – 21 year old Somali respondents said that they wanted “mixed youth and sports clubs so they can communicate better with people outside the Somali community”.

“Some young Somalis appear to identify more with the host community than their parents, but they can still find it hard to come together as a group, away from the family home. The “territory” they know is either the family home or places in which they are a minority. Hence the calls from young people (and adults) for youth centre/s.” – Hope for the future: Somali community voices; its concerns and ideas

It can be argued, consequently, that lack of communication between young people with different backgrounds is a barrier to integration and possibly a threat to community relations. Sharif claims that there is mistrust and misunderstandings between communities. He provides evidence to substantiate his claim: “A youth research that I involved five years ago highlighted that the misunderstandings are based on misinformation. And that is one of the main reasons that we should address the misconceptions about the Somali community and British Muslims.”

However the community relation is slightly better now, states Sharif. And if elected, “I will find a way to bring young people [with different backgrounds and from different communities] together so they can talk about their issues.”

At a dinner party held in support of Mr Sharif’s candidacy on Saturday evening, Manchester Somali community leaders and elders discussed how they were disillusioned with the political process before and their hopes in the future.

“We have been less politically active than Bristol [Somali community who have Councillor Hibaq Jama],” said Mr Ali. “But Mahadi has shown us that there is a light at the end of the tunnel. His selection was good news, but his election will be a milestone achieved. I’m very confident that he will win and Asad’s failure [Asad Abdi, Lib Dems candidate for Moss Side in 2015] proves that Somalis mainly vote for Labour – I’m amongst those who usually vote for Labour.”

“Most importantly, our young people need to be more politically conscious. It beggars belief that even some university students don’t bother to vote. We’ve recently engaged them and succeeded to hold a debate at the university, where thirty students have attended. The outcomes of the debate were, however, tangible.”

Mr Ibrahim Barud, a prominent member of the elders in the community, stressed the need to promote fairness and inclusiveness. “Once you [Mahadi Sharif] get elected, it is imperative that you treat everybody equally and work for all the people in the ward regardless to their background,” he advised.

Members of Bristol Somali Labour supporters – Saed Ali, Khalil Abdi and Fuad Hussein – who were invited as guest speakers, talked about the importance of promoting the unified voice of the community. They also noted the need to maintain a fine line between Somali and British politics, and the need to gain an understanding of how to hold politicians to account. 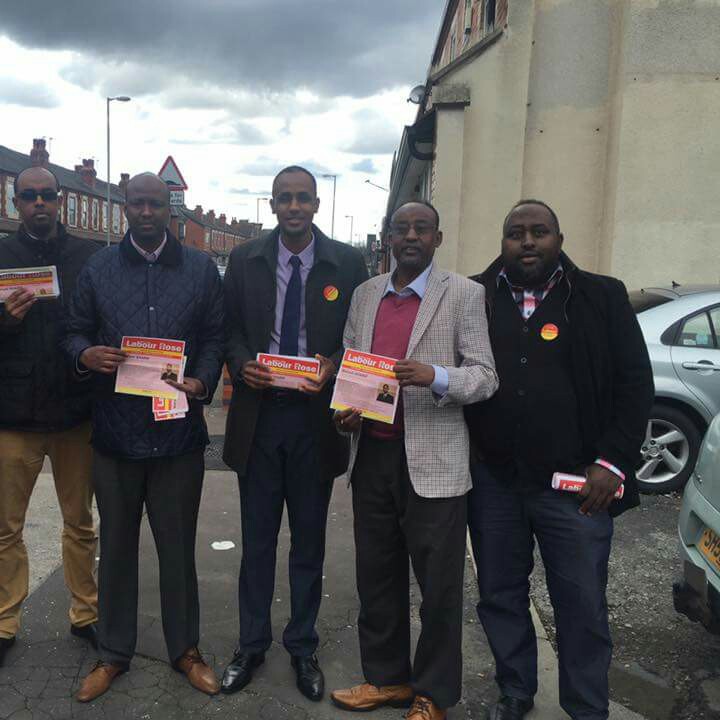 Although we, as British Somalis, bound to follow what is happening back home and help its reconstruction, we are obliged to rise to the challenges and opportunities presented by UK’s integration process.

Other members of the Somali community in Manchester who were present at the event showed their full support for Sharif. One of the community leaders said, “We are going to vote for Mahadi not so much as a Somali brother, but more as a role model for many young people in the city. He has strived to realise his aspiration through education. And we wish that every young person makes positive contribution to the local communities.”

Manchester is a home to a long standing Somali community. The size of the community has grown rapidly over the past 15 to 20 years and it has been estimated to be around 15,000. Somali pupils are the second largest ethnic minority group in local primary schools. According to January 2015 School Census, there were 1427 pupils who identified their first language as Somali in Manchester primary schools.

In comparison to other Somali communities in the UK and Black and Minority Ethnic groups in the city, they have many similar challenges including education, housing and employment, too many to list. However, political under-representation has been identified as the biggest challenge they are facing currently.

However, Manchester’s large Somali population, who have contributed so much to the local economy and transformed Moss Side, are hoping to remove this persisting barrier through the ballot box and with the help of one young man, Mr Mahadi Sharif.