Refugees are a fact of everyday life today. They come from all over the globe and mainly live in developing countries. Their story is one of hardship, misery and courage in the face of adversity. One cannot help, but be humbled by the stories of courage and immense patience as refugees flee their homes and spaces they love to start anew elsewhere far from their heart, culture and those they love. Many would have us believe that these people are only after exploiting the developed nations’ benefit systems and hide under the banner of refugee while seeking economic advantages. This is a misguided and false accusation that is intolerable. Refugees deserve better treatment and welcome especially in those nations that claim to champion Human Rights. 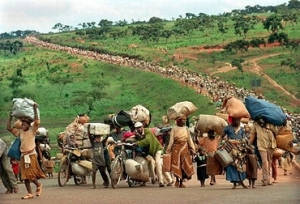 Refugee week in the UK which is between 17th– 23rd June this year and UNHCR World Refugee Day which falls on 20th June are key dates to acknowledge and reflect on the dangerous and life altering journeys many refugees take to secure the basic freedoms many take for granted in the developed world. Their courage, campaigning and advocacy once in the UK, often lead to better political settlements for those they left behind.

Today in the UK refugees are vilified as benefit spongers, crowding an already overcrowded nation. The skeletal support structures that were once in place are now almost all abandoned apart from sketchy free legal advice which is only restricted to the Refugee and not their family members who have a right to join them under the 1951 Geneva Convention.

The following poem, The Journey, is meant to illustrate that refugees do not suddenly appear from somewhere out of choice to be a burden on the British tax payer. They have stories and history. Proud histories even if difficult. It also conveys the real betrayal which is the lack of support available to them upon arrival in a safe country which is a wealthy signatory to the 1951 Refugee Convention.

The poem is written by Liban Obsiye who is a Director of Ashley Community Housing and Support (ACH) in Bristol who has extensive experience of assisting refugees in London and Bristol; a community activist with valuable experience of supporting and empowering refugees from different backgrounds. He is also a lead writer and assistant editor at BSMG.

The gun releases death on to the innocent

The murderers kick aside the still corpse

In the sea of blood lay all I loved.

The pain of loss refused to be evicted

The image of death forever stamped in my mind

A place of beauty and light

The home in my heart

From the old porch the land lay naked

Late at night the wind teased the grass

Stroking it gently from idleness

The winds only carried the stench of death

Innocence banished itself from these lands.

I was carried into darkness by deaths agents

Bury the dreams of many

Fear strengthens the will

Anticipation and hope sail the boat.

The heart of a man softened by naked collective misery

The mind sharpened by predatory instincts.

A land of security

The land of hope

Home to my rebirth

Liban Obsiye and BSMG welcome and encourage comments and feedback from readers.